The champion is slated to receive at least $25,000 with the Top 10 in the standings at season’s end to also receive a check for their performance.

Macon, IL (January 24, 2023) - The structure of a minimum $100,000 point fund was announced today for the ASA STARS National Tour. The champion is slated to receive at least $25,000 with the Top 10 in the standings at season’s end to also receive a check for their performance.

“We welcome all drivers to compete in the ASA STARS National Tour, and we want to enhance things for those who commit to the tour full-time by the top 10 in points,” said Bob Sargent, President of Track Enterprises, which operates the national tour and the three regional tours (ASA / CRA Super Series, ASA Midwest Tour and ASA Southern Super Series). “Our hope is that we are able to increase this point fund in the future, but we feel confident this will help the full-time teams. 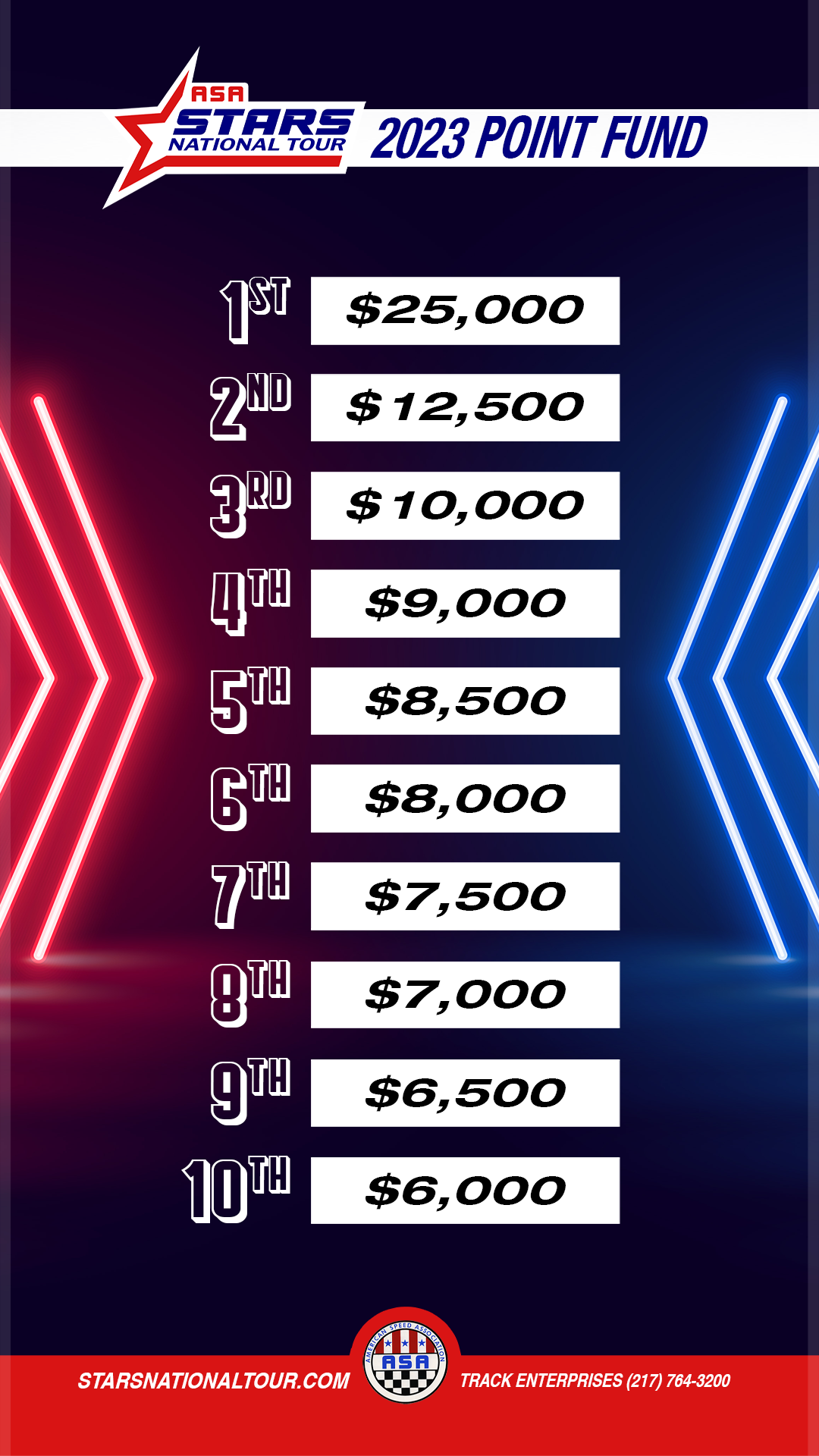 All drivers and car owners are required to be licensed to be eligible for the point fund as well as the Winner’s Circle and Contingency Award programs, which will be announced soon.

Applications for teams are now available to download at www.asastarsnationaltour.com. Those forms are available via a PDF document. Teams will be required to complete the form and return as instructed on the application.

The ASA STARS National Tour will open the 10-race, six-state tour at Five Flags Speedway in Pensacola, FL on Saturday, March 11, 2023. Tickets are available for purchase online at https://bit.ly/ASA5FlagsTixs.

For the full ASA STARS National Tour schedule, plus Super Late Model rules and other information, please visit the series website at www.asastarsnationaltour.com, and be sure to follow the series on social media (Facebook: STARS National Series | Twitter: @racewithstars | IG: @starsnational).

The ASA STARS National Tour will debut in 2023 for Super Late Model racing in America. Announced in October, many of the best drivers in America are expected to compete in the 10-race national tour with a minimum $100,000 point fund. The championship team will be guaranteed $25,000.

The national series is made up of three races from each of the regional pavement Super Late Model Series under the Track Enterprises banner; the ASA CRA Super Series, the ASA Midwest Tour and the ASA Southern Super Series.

A Winner’s Circle program will also be part of the ASA National Tour for licensed drivers/teams with perfect attendance. The program details will be announced at a later date, but it will be in the same vein as ASA utilized in its heyday.

Track Enterprises, a Racing Promotions Company based in Illinois, will operate the ASA STARS National Tour. It announced the acquisition of the CRA sanctioning body in January and followed that up with the purchase of the Midwest Tour in July. In October, Track Enterprises President, Bob Sargent announced a partnership with the Southern Super Series which set the table for the formation of the ASA STARS National Tour.